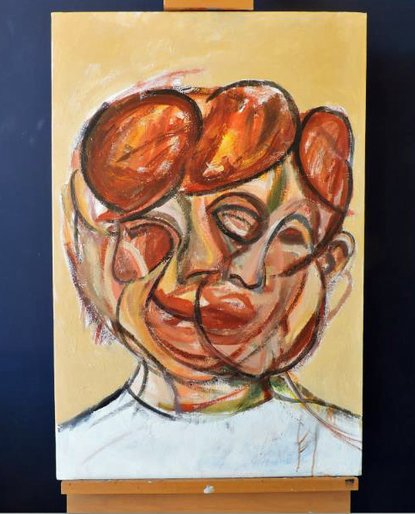 Over the course of the project I have had a strong focus on film and portrait painting, so when bringing it all to a close I wanted to include these aspects. I made a video in which I edit a mirror so it looks like I am painting myself in a blurry form. The painting I ended up with I wasn’t happy with, so I reworked it into the painting you see here.

There are several aspects that I have learnt over the course of the project included in this painting, such as Francis Bacon inspired abstract forms in the face, layering images over one another, an expressive style among many other things included subconsciously. The point of my final painting was to capture movement in a static image, so that it resembled my blurred reflection in the video, while being exciting and thought provoking. The blur and indefiniteness of the face represents the changing view of ourselves as we are locked inside with only our thoughts, as well as the passing of time and ‘blending’ of days as they all seem so repetitive.

When comparing the final painting to the first one I did on film, there’s one thing I can say for sure and that’s that I’ve learnt a lot about painting portraits and I have definitely improved because of the tests I put myself through. I’m a painter outside of the course, but I have never had to bend my technique to achieve a certain goal quite like I have done in this project, such as learning how to paint movement for example.